We mourn the loss of Peter Weiermair 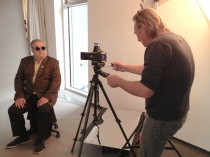 Peter Weiermair - porträtiert von Koos Breukel im Fotohof 2013
Foto: Michael Mauracher
Peter Weiermair died last Friday in Hall in Tirol after many years of illness. He was a close personal friend to us over the decades and an important companion to Fotohof.
As a curator, author, editor, publisher and museum director, he was a lifelong partner and supporter to many artists, open in his love of art and free from the fashionable trends of the art business. Peter Weiermair was formative for the establishment of photography as an artistic discipline in Austria and in Salzburg, at least since the presentation of his epoch-making exhibition "Photography as Art 1879-1979, Art as Photography 1949-1979", organized by Salzburger Kunstverein in 1980, he was an essential stimulus and later a supporter of the concerns of Fotohof.
In his management functions, at Galerie im Taxispalais in Innsbruck, as director of Frankfurter Kunstverein and Rupertinum in Salzburg, during his time in Bologna at Galleria d'Arte Moderna and afterwards, he showed central but also very young positions of art and photography for the first time, thus inspiring us all.
Peter Weiermair's spirit and wit, his constant wandering in the worlds of art, driven by curiosity and unconditional interest are legendary, very rare today, but in his exemplary and radical nature a legacy for younger generations.
Brigitte Blüml-Kaindl, Rainer Iglar, Ulrike Lienbacher, Kurt Kaindl, Michael Mauracher, Andrew Phelps, Birgit Sattlecker, Herman Seidl and the Fotohof Team

Exceptional Prices on all Photobooks
» mehr

We mourn the loss of Peter Weiermair

Anna Breit  Teens (in their rooms)