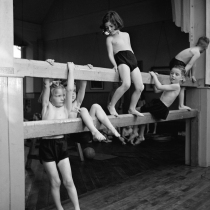 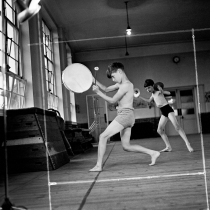 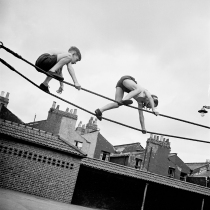 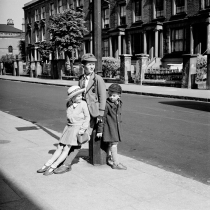 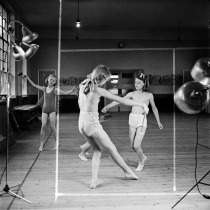 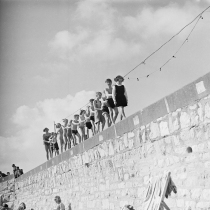 Virtual tour of the exhibition:
vt.albertvisuals.com/fotohof/archiv/tudor-hart/index.html
Instructions: use your mouse to swivel a full 360 degrees around the exhibition and get as close to, or as far back from, the photographs as you need to. To move to another position or to a different room, simply click the white cross on the floor.

In this exhibition the FOTOHOF archive presents the newly discovered and now for the first time exhibited late work of the important British-Austrian photographer Edith Tudor-Hart. She took the photographs in the early 1950s and published them in a two-volume pedagogical introductory work on early school education entitled "Moving and Growing" (London 1952). In this work, the elements determining her life - the upbringing of children and socially engaged photography - come together in one work.

Edith Tudor-Hart comes from a secularized Jewish family in Vienna and her first professional training was as a kindergarten teacher with a special interest in modern, enlightened pedagogy. She also took Montessori courses in London. Later she turned to photography and after studies at the Viennese „Graphische Lehr- und Versuchsanstalt“ and at the „Bauhaus Dessau“ she went into exile in London to work very successfully as a photographer. Edith Tudor-Hart's brother is the photographer and filmmaker Wolf Suschitzky (1912 - 2016), whose life's work is also kept in the FOTOHOF archive.

Her life and professional activities were overshadowed by her involvement in a British espionage ring for the benefit of Moscow. Writer Peter Stephan Jungk dedicated a diligently researched book to this never fully elucidated episode: "The Dark Chambers of Edith Tudor-Hart". The book clearly shows that this situation destroyed her life permanently and even led to the partly destruction of her negatives and photographs in the early 1950s.

In her later career she begins a new photographic commission from the British Ministry of Education. These images, exhibited in the FOTOHOF archive, were scanned from her original negatives and printed out. For this project, Edith Tudor-Hart visited several schools and boarding schools in the wider London area, where she photographed the students during physical activities, dance and movement exercises. In an interview on the occasion of the screening of the film "Tracking Edith", based on Peter Stephan Jung's book research, he says about this special photographic work: “It’s magnificent. Every time I see it, I’m moved. But it’s not known enough, and it’s a shame.”

In many exhibition pictures the "making of" can still be clearly seen, as the entire negative was always enlarged during the preparation in the FOTOHOF archive. As a result,  the lamps used by Edith Tudor-Hart as well as her drawings for intended cut-outs can still be seen in the negatives. This gives the pictures an improvised and spontaneous character and allows insights into her working method. At the same time it also becomes apparent how intensively and with what great empathy she devoted herself to the subject of the enlightened and physically accentuated upbringing of children.

The exhibition also includes selected images from two other small reportages, which were also part of the negative legacy. On the one hand, a series on the "Wartime Nursery Guildford in Somersham" (1941), one of the first childcare facilities set up in several English cities during the Second World War. On the other hand, a reportage on work at the "Bromley Art School" (1952) near London.

The negatives of Edith Tudor-Hart are part of the estate which was handed over to the FOTOHOF archive by the Suschitzky family. The FOTOHOF archiv was responsible for the preparation of the negatives as exhibition pictures. Her photographs can be found in the archive under this link:
https://www.archiv.fotohof.eu/collection/148/AUSSTELLUNG+EDITH+TUDOR-HART.html

Note: An excellent article by James McArdle about the work and life of Edith Tudor-Hart with examples from the exhibition in the FOTOHOF archive