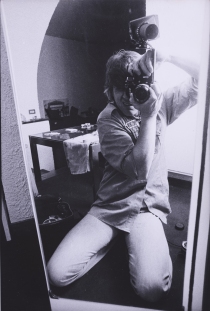 With the exhibition Rudi Frey – Professione: Reporter FOTOHOF provides insight into the work of press photographer Rudi Frey (*1941 in Radebeul / Germany, †2014 in Rome / Italy), who was internationally active from Rome, especially from the 1960s to the 1980s. Since 2019, his extensive estate has been preserved and made accessible in the FOTOHOF archiv.

Rudi Frey's photographs are testimonies to the "golden" age of press photography. While film and television did not yet represent overpowering competition due to their cumbersome technology, the photographic image was the central medium of picture reporting. Both the fashion and glamour photography of the "Swinging Sixties" and the major investigative photo reports from the world's crisis and conflict regions are characteristic of this period.

In keeping with the high value of the photographic image, the stylized figure of the (male) photographer, to whom Michelangelo Antonioni gave a cinematic monument in Blow Up (1966), was also a meaningful part of the world of internationally active reporters and photojournalists, who were perceived as glamorous.

The life of Rudi Frey traces this role of the photographer almost ideally. Born in Germany, he grew up with his family in Salzburg, Austria, after the end of the war.

After graduating from school, he leaves Salzburg and goes to Paris to study film. He works as a cameraman but also as a model and assists David Bailey, the famous fashion photographer (who is considered the model for the role of the photographer in Blow Up). From 1973 Rudi Frey works in Milan for the magazine Panorama and later as a permanent correspondent for Time Magazine in Rome. In 2014 he dies in Rome.

In 2019, Rudi Frey's estate is transferred to the FOTOHOF archiv, where it will be conserved and made accessible. The exhibition Rudi Frey - Professione: Reporter will be arranged around a large number of self-portraits that show their creator entirely in the style of the aforementioned stereotype, as a successful, carefree and daredevil photojournalist.

These self-portraits are juxtaposed with his reportages: dedicated picture series from the USSR, where he lived for almost two years, his reportage on the Solidarnosc movement in Poland, which earned Rudi Frey the "Robert Capa Gold Medal" in 1981, and photo series away from political reporting, such as advertising photographs for Silvio Berlusconi. A look at the multi-layered work of press photographer Rudi Frey reveals not only the life of a photo reporter, but also a market that is supplied with images by the latter, but which also creates the image of its supplier itself.


Press previews and meetings with the curators can be scheduled by appointment. Please call us on +43 662 849296 or email us at fotohof@fotohof.at to arrange a date.