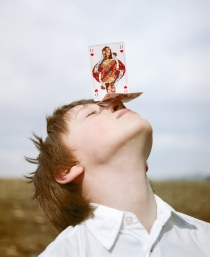 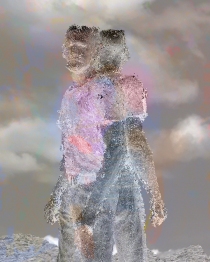 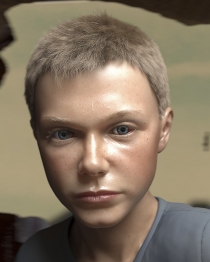 
Simon Lehner’s works are usually autobiographical in essence. Photography has always fascinated through its ability to capture and preserve past events in images that might then be deciphered at some later stage. In Lehner’s image-based, cinematic, but also sculptural works, photography has evolved further, into a broader, emotionally highly charged space thanks to the use of the latest technology. Indeed, Lehner has expanded the medium’s usual imaging process time and again using advanced high-tech simulations that are, however, always based on genuine photographs.

In taking photographic processes to the next level in this way, Lehner explores the now increasingly topical boundaries that exist between generated and lens-based photographs.
Incorporating his personal archive has also given rise to works created from and with recollections. His groups of works reflect, in a most contemporary way, the media-based conditions on which photography today is predicated, characterised by powerful emotional planes.

How far is a light-year? (2005–2019) revolves around fatherhood and the way in which the medium of photography bridges personal distance. The series uses a 3D rendering method of Lehner’s own design to reconstruct the image of his father, who abandoned the family, based on some fifty photographs Lehner took as a 9-year-old.
‘The series shows my attempt to create a portrait without physical contact. It comes from a childlike longing to make my father physically tangible within the digital space and points to an emotional as well as a physical distance. The title references a question I asked my father in 2005 and refers to the time that has passed since he left the family, but also to the medium of photography itself.’

The mind is a voice, the voice is blind (2019–ongoing) explores the cognitive dialogue at play between memories and consciousness. Drawing on personal experiences, the work addresses issues of domestic and emotional violence and the ensuing traumas. The work is structured as a series and conceived as an exhibition. It combines different media developed from various treatments and methods for processing photographic source material. The group of works includes image-based sculptures, photographs, and lens-based 3D animation videos – these works were generated from the personal archive through various digital reconstruction methods and reference a pattern of traumatic memories. This approach based on incorporating his pre-existing personal archive constitutes a sort of ‘work from memory’, i.e. a work created with and from memory.
Through the modifications made to the photographic processes, such as developing a 3D animated alter ego or generating the child’s bedroom based on existing archive material, the artist aims to make actual experiences and traumas palpable while highlighting an attempt to develop a formal language in which the medium itself forms an emotional level.

For his stunning debut book Jaga, Simon Lehner was out and about a great deal with hunters – not to stalk pheasants or red deer, but the hunters themselves. Lehner is not a Jaga (the Austrian dialect word for ‘hunter’), at least not in the conventional sense, but he became interested from an early age in this particular kind of mostly male-dominated culture. The young photographer demonstrated early on a talent not just for the individual shot, as it were, but also for developing picture-based narratives. He first began working on his Jaga project aged 17.
‘Essentially, it’s about the raw feeling of a primal instinct I felt during the hunt. The immediate way of life that is associated with it. The frenzy. The peace and quiet. The simplicity and peculiarities that the countryside affords. The past and the present of human survival and action. The feeling, during the hunt, of going back in time. Of being back at the very dawn of mankind, with man pitted against animal, animal pitted against man. And the land against both.’ (Simon Lehner)