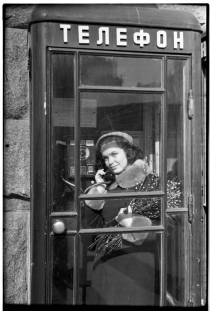 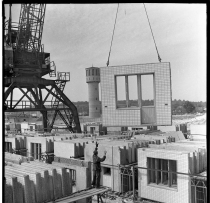 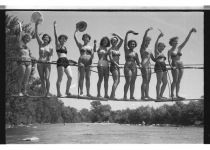 
An interactive installation featuring Ukrainian press photographs from the period 1957 to 1971 invites you to play with the past. The Playing the Past exhibition is to be inaugurated as part of a discussion with the Ukrainian artists and the curator at 7 pm on Thursday, 8 August 2019, at the FOTOHOF archiv .

The main part of the exhibition is comprised of photographs from the archive of Iryna Pap, a press photographer born in 1917 who worked for the Soviet newspaper Izvestia, among others. Her work is representative of a social realism in Soviet photography that ranges from photographs of smiling factory workers and new urban building projects to documenting congresses within the Party. In its context the affirmative imagery can be seen both as a form of documentary and as a document per se.

For the presentation at the FOTOHOF archiv, the photographs (along with their original sleeves and descriptions) have been reproduced on cards so visitors can re-arrange them into new groups of photographs or select them according to their own criteria. They are thus able to play with the iconic images of the recent Soviet past while processing the imagery of that era.

The second part of the exhibition consists of an installation entitled Unfixing. Projected in this section are two visually distorted black-and-white films which the photographers Valery Miloserdov and Dima Sergeev discovered in their own family archives.

Both parts of the exhibition showcase different ways of documenting and recalling historical events. Firstly, the official press photography and its kinship to propaganda; secondly, private amateur films featuring a public spring-cleaning campaign and the swearing-in of recruits.

For the FOTOHOF archiv this invitation extended to the Ukrainian artists' collective IZOLYATSIA is an opportunity for an exchange of views on historical photography. The FOTOHOF archiv itself contains photographs that were taken in the period before and during the Third Reich and are now likewise subject to a critical re-evaluation. Both the exhibition and the discussion with curator Kateryna Filyuk and the artists Valery Miloserdov and Dima Sergeev are designed to make the subject matter more accessible to a wider audience.

The platform for cultural initiatives IZOLYATSIA was founded in Donetsk, Ukraine, in 2010, but relocated to Kiev after its premises were occupied during the hostilities of 2014. IZOLYATSIA works to combine artistic activities with social interactions.