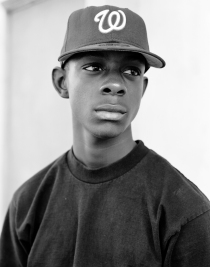 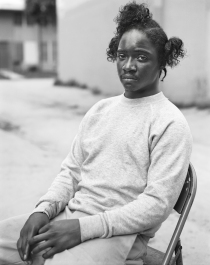 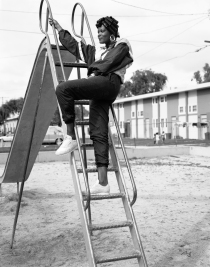 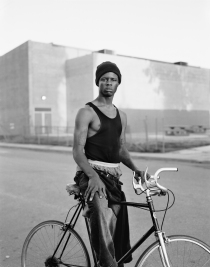 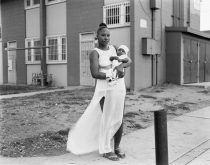 
FOTOHOF is showing the groundbreaking work Imperial Courts, 1993−2015 by Dutch photographer Dana Lixenberg, its first such presentation in Austria. The project, featuring residents of Imperial Courts, a public housing project in Watts, South Central L.A., was produced over the period of twenty-two years.

Lixenberg's highly committed project came about in the aftermatch of the riots of 1992, which were the consequence of the acquittal of the four LAPD officers who had used brutal violence against Rodney King, an African American motorist, during his arrest. In the wake of the riots, Lixenberg made a series on the rebuilding of South Cental L.A. for a Dutch publication. This trip was the genesis of her Imperial Courts work. She became interested in exploring life in the projects through a stripped down and de-sensationalized approach, and returned to the area in the following year. After being introduced to Tony Bogard, leader of the PJ Watts Crips gang, and securing his approval, she found her way into the community of Imperial Courts and slowly gained the trust of the residents. Using a large-format camera and black-and-white film, all portraits were made outdoors with natural light, with the subjects depicted as both self-assured and vulnerable.

Her portraits are sustained by a sense of mutual respect, in a relationship lasting more than two decades. What changes over that period of time is not just the physiognomy and the bearing of the protagonists (due to their apparel and/or hairstyles), but also the appearance of the housing estate and its architecture.

Over the time span of the project some in the community were killed while others disappeared or went to jail. Children featured in earlier photographs had grown up and established families of their own. Lixenberg expanded the project with video and audio recordings to create a nuanced portrait that is also sociological in its scope and impact. In this way, Imperial Courts constitutes a complex and evocative record of the passage of time in an underserved community.

Once the project was completed, she incorporated the material in her book Imperial Courts 1993−2015 published by ROMA Publications, Amsterdam. The first comprehensive presentation of the project was shown at Huis Marseille, Amsterdam, in December 2015.

The photographer garnered a great deal of international attention for this body of work, especially when she was awarded the prestigious Deutsche Börse Photography Foundation Prize in 2017.