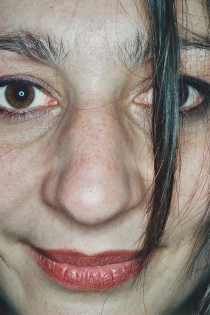 
With Manfred Willmann's Blitz & Enzianblau [Lightning Flash and Gentian Blue] and 2018/2017 FOTOHOF has chosen to focus on the two most recent groups of works by an artist whose position is as pivotal to Austrian photography as it is unique. As with his earlier works (Schwarz und Gold [Black and Gold], 1979–1981, Die Welt ist schön [The World Is Beautiful], 1981–1983 and Das Land, 1981–1993) these two series reflect long-term explorations by the artist of his origins and his social environment, with a scope that is deliberately extensive. Also worth mentioning in this context are his Kontaktporträts [Contact Portraits], 1985–1986, which adopt an analytical, serial approach to people within his 'milieu'.

The group of works entitled Blitz & Enzianblau, published as a book by FOTOHOF edition in 2017, features a series of photographs first created back in 2005. Out of all the photographs taken that year, Manfred Willmann subsequently commissioned a selection of more than seven hundred prints, but only returned to them some ten years later. Blitz & Enzianblau is structured into 17 'chapters' reflecting a time span of an entire year, in chronological order. They feature motifs characteristic of Manfred Willmann's work. And yet, compared with earlier works, the landscapes, the fauna and flora, the objects of everyday life, and the portraits feature an unusual closeness to each object portrayed.

Blitz & Enzianblau is comprised of photographs that not only depict the world as it appears on the surface, but also tell the story of the medium of photography itself − and its own particular ability, through images, to lend an iconic presence to the world in all its beauty, ugliness and transience. Just as concrete poetry relates to the structure of language itself, Willmann exposes the texture of the photographic medium. His photographs are about constellations, still lifes and captured moments − often painful in their existential depth, yet entirely free of maudlin sentimentality.

The title of the most recent group of works on show, 2018/2017, references the time span in which it was created. Here Manfred Willmann returns to the square format of his earlier series. Compared with Blitz & Enzianblau the proximity to the photographed objects − blossoms, plants and fruits, insects and food − is even more telling. Enthralled by the intensity of the photographer's own scrutiny, the viewer's attention is inexorably drawn to the tiniest of details. Studies of nature and everyday life are juxtaposed alongside photographs of newspaper cuttings, printed texts and television screens that shatter the intimacy of the work, putting the subjectivity of the gaze into relative perspective while enhancing it. The image sharpness, the materiality of the surfaces and structures bolster a visual imagery which, as the artist says, is suited 'to show the world in even greater beauty or ugliness, perhaps.' ¹

Manfred Willmann's images of the world are no exalted glorifications; rather, they are the expression of an unpretentious artistic personality which, with unwavering consistency, has succeeded in creating one of the most impressive photographic works to have come out of Austria − and about Austria.

Manfred Willmann, *1952 in Graz; lives and works in Graz and in the south west of the federal province of Styria. As of 1975, as head of the Fotogalerie im Forum Stadtpark he organized an international exhibition program; between 1979 and 1996, in collaboration with Christine Frisinghelli, annual symposia on photography. Founder in 1980 and editor until 2010 of the magazine CAMERA AUSTRIA International. Manfred Willmann is widely recognised as one of Europe's foremost photo artists. In 1994 Willmann was awarded the Cultural Prize by the Deutsche Gesellschaft für Photographie (DGPh); in 2009 he was the recipient of the Austrian State Prize for Photography. His works have featured at numerous solo exhibitions, including the Museum Folkwang, Essen, the Stedelijk Museum Amsterdam, the Vienna Secession, and currently the Albertina in Vienna.


Press previews and meetings with the artists can be scheduled by appointment. Please call us on +43 662 849296 or email us at fotohof@fotohof.at to arrange a date.