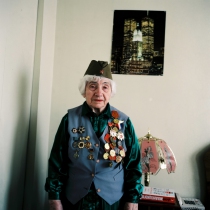 
One night Lilla Szász dreamt of having a camera, even though she had never even held a camera before. Soon afterwards, her father left an old professional camera on her desk for her. From that moment on, photography became her means of exploring and expressing the complexity of human relationships. In a world shaped by globalisation and migration and still largely dominated by men, where the struggle for power and influence increasingly discriminates against socially disadvantaged communities, Lilla Szász focuses on groups in society who are at risk of marginalisation and living in closed communities. She explores stories of human vulnerability and addresses issues such as the sense of belonging, gender and identity. She searches for stories that are both very personal and universal while highlighting the socio-political contradictions in contemporary society. Referencing Lilla Szász's profound inspiration through literature and film − and featuring works by artists from different genres − the three acts at the exhibition create a dialogue between sensitive observers of intimate life stories. These fictional conversations correlate different approaches and narrative modes and allow women's views and social interests to reverberate within a larger international context.

Act 1 'I looked at the empty suitcase. On the bottom was Karl Marx. On the lid was Brodsky. And between them, my lost, precious, only life.' (Sergei Dovlatov: The Suitcase)

In the first of these acts, Lilla Szász sets off on a long journey in search of very personal and human stories of different realities. Inspired by her studies of Russian language and literature, she travels first to Saint Petersburg to direct her photographic gaze at Sunbathers (1998), the peculiar group of city inhabitants who spend their days outdoors by the water, beneath the walls of the Peter and Paul Fortress. Here a group of naval academy cadets march in Gluklya's The Triumph of Fragility (2002), carrying delicate white dresses in front of them as if they were something fragile, something that 'constitutes the essence of life itself'. These young marines fulfil their task with a feeling of sincere commitment and love. The Russian Jewish Veterans now living in Brighton Beach whose lives Lilla Szász documented in Comrades (2010) also served their country with genuine dedication and commitment. The photographer's gaze focuses on their vulnerability as they go on looking for a place in society, somewhere to belong. 'When you're far from home, feeling at home is transitory,' says Katarina Šoškić about feeling settled and the rhythm of various moves. For Home No Home (2016) she visited and photographed all the places she lived in during her temporary eight-year stay in Vienna.

Act 2 'Happy families are all alike; every unhappy family is unhappy in its own way.' (Leo Tolstoy: Anna Karenina)

Between 1982 and 1987, Paz Errázuriz spent a good deal of her time with a group of men who cross-dressed and prostituted themselves in various brothels in Santiago and Talca. The images were published in the photo book Adam's Apple, a collection of black-and-white photos, texts and interviews with members of a large unconventional family that broke the mould and was decimated by AIDS, economic uncertainty and police persecution. For many people who had spent most of their young lives living in an orphanage, the path led straight to prostitution. Lilla Szász became good friends with three prostitutes who lived in a very complicated relationship in a small apartment in Budapest.

This was the setting for Mother Michael Goes To Heaven (2008-2010), the place where they received their clients, where the two boys of this unusual family met, and where Michael committed suicide. In another Budapest apartment lives Mendi (2013), a former porn star in an complex relationship with her mother and her sister's son, an autistic boy whom she loves as if he were her own child. For this series, Lilla Szász found great inspiration in Grey Gardens, a 1976 documentary by Albert and David Maysles that is an intimate portrait of a mother and a daughter, Big and Little Edie Beale, aunt and first cousin of Jackie Onassis. They lived in a world of their own and managed to get on with each other amidst the decay and disorder of their 28-room East Hampton mansion.

Act 3 '...buzzing and crackling in my ears, the rhythm of the waltz goes tamtamtamtata...' (György Dragomán: Waltz)

Asked if she has any friends in the retirement home, Maya Schweizer's grandmother answers in a monologue that is both very lucid and very dreamy about how she feels in her new home. The video Manou, La Seyne sur Mer, 2011 (2012) features a fragmentary reconstruction of a stream of consciousness that leads nowhere. Manou lives in a retirement home for old Jewish women, just like the women in Lilla Szász's Golden Age (2004). Szász focuses on how they go about creating a new home to replace their old one, and how they live with their memories and souvenirs, where every object has its own story, and every photo on the wall contains a lifetime. An old photograph found in the photo album of a 80 year-old woman in Tokyo was the starting point for Ditte Lyngkaer Pedersen's Laughter (2014). The project examines the unexplained story behind the picture. During years of letter correspondence with Yoshiko Okuzawa, the artist re-enacted the photograph with various groups that she herself belongs to around the world. When Lilla Szász entered the apartment of the late Mrs Brown, she began an extraordinary, intimate correspondence and communication with the deceased old woman. They became better acquainted through images of the objects and words of their diaries, and this peculiar dialogue between them helped the artist to start a new life and a Happy New Year (2013-2014).


A cooperation with:
Inda Gallery
Fotogalleriet