FOTOHOF archive: Hans Rustler − Photographic Examples Analogue Test-Images and Pictures of the Interior of the Agfa Photo School from the Thirties 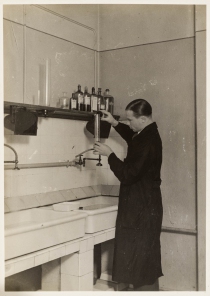 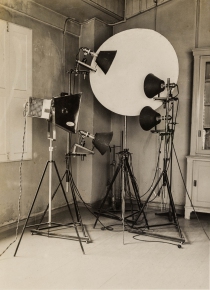 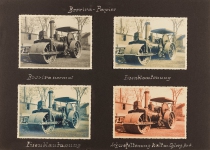 In 1931 Salzburg pharmacist Hans Rustler studied at the then famous Agfa Photoschule in Berlin, compiling a stunning sample folder that encapsulates the state-of-the-art in analogue photography at that time. At the presentation on show at the FOTOHOF archiv these ‘sample images’ are complemented with photographs of interiors of the Photo School, a small selection of photographs of Berlin, and a portrait album of Hans Rustler himself.

Hans Rustler the photographer is a new discovery, one that was made possible by his daughter Renate Rustler-Ourth in collaboration with the FOTOHOF archiv.

The test series of Hans Rustler’s photos reflects the state of the art in photography in 1931. The meticulously labelled image series mounted on cardboard shows the efforts then made to reproduce colour tones accurately in black-and-white photography (i.e. orthochromatic reproduction) and the control of contrast achieved using various Agfa photo papers and developers. Other exposure series experiment with the transition from orthochromatic film (characterised by poor sensitivity to the colour red) to the modern panchromatic film. Other examples illustrate the impact of errors in development and the repercussions of improper handling during photo development. Finally there are also lots of image sheets featuring various methods for toning photographs. At that time, this was less an aesthetic question than a matter of improving the durability of the photographs.

A second, comprehensive series offers insights into the premises and facilities at the Agfa Photoschule in Berlin and features several photographs of the teaching staff at the school and Hans Rustler’s fellow students. Of particular interest are the insights into large negative and positive laboratories, daylight studios and technical equipment such as slide projectors, large-format enlargers, microphotography apparatus and large-format cameras. Aside from the invaluable information they provide on early analogue photography these images also bear contemporary witness to the state of the art in photography at the time and to Hans Rustler’s photographic skills after what was, presumably, a very short period of training.

A display case contains a complete photo album with photographs of Hans Rustler himself, from childhood through to old age. Presumably some of these photographs are self-portraits while others were taken by other photographers. In their formal unity they provide rare documentary evidence of Rustler’s long and unbroken involvement with the many opportunities afforded by photography.

Biography of Hans Rustler
Born into the Austro-Hungarian Empire on 1 November 1910 in Liebenstein near Eger, present-day Libá, Bohemia. Christened Johann, died on 26 August 1988 in Salzburg.

His parents Christoph and Katharina Rustler, née Wassermann, ran a colonial goods store in Liebenstein. After the first world war the Sudetenland became part of the Czechoslovak Republic. During the economic slump of the post-war period his brother Josef Rustler saw little in the way of future prospects for himself in Liebenstein. In 1923/1924 he emigrated to Salzburg and established the firm of Rustler & Co, a pharmacy wholesaler on Bergstrasse.

Hans Rustler remained in the Czech Republic, completing an apprenticeship as a pharmacist with Messrs. Wunderlich in Asch from 1924 to 1927. He sat his pharmacist exam in Karlsbad/Karlovy Vary in 1927 and stayed with the company until he was enlisted in the Czech military in April 1929.
Aged 19, he managed to complete his training as an army medic and worked as a military pharmacist. Thereafter he specialised as a chemist in Marienbad before moving to Berlin soon after to pursue his studies. There he attended the Agfa-Fotoschule, one of the first establishments to offer training opportunities in photography. A famous alumnus of this school of photography was the photo journalist Hilmar Pabel.
He then returned to Marienbad where he was employed as a pharmacist until 1934 before emigrating to Salzburg in July and completing a short phase of training in wholesale trading at his brother’s company.
Soon thereafter he ventured out on his own and opened the Adler Drogerie on Saint-Julien-Strasse. He focused in particular on photography, a field in which he had acquired in-depth knowledge and expertise in Berlin.

By late 1939 the second world war had caught up with him. Even before his marriage to Barbara Sax he received his call-up papers to serve on the western front and joined the military the day after his wedding.
In February 1940 he was taken to the front-line military hospital at Landstuhl following an accident and he was subsequently discharged from the army. During this time his wife Barbara Rustler assumed sole responsibility for running the business on Saint-Julien-Strasse together with their employees.
Hans Rustler managed to avoid a second conscription in 1942 due to a heart condition and was posted to Salzburg. By then chemists were in short supply, so Hans Rustler was assigned to work in pharmaceutical manufacture. As head of a facility vital to the war effort he produced medicines in barracks located in the immediate vicinity of the main railway station, ready for dispatch to the front. At times he had a workforce of more than thirty employees working under him, all of them women.

As a consequence of the war, his father Christoph Rustler and his sister Luise Rustler were forced to leave their homeland and found shelter with the family at Saint-Julien-Strasse.
The property in Liebenstein and the heritage were now lost, so Hans Rustler was forced to dedicate himself heart and soul to building up his business.
Even so, he was unable to forsake his passion for photography. His wife Betty remained his favourite model and, for the rest of his life, he stayed true to photography as an amateur photographer.
As a pharmacist he quickly made a name for himself, manufacturing a wide range of products. He was famous for his knowledge of herbs, his Swedish bitters, and various creams.
He continued to run his pharmacy business until his retirement.
(Biography: Renate Rustler-Ourth)