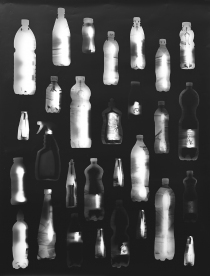 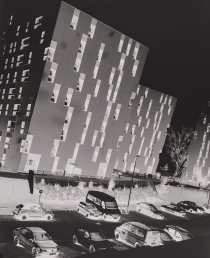 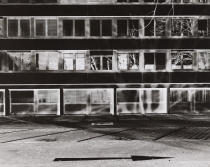 Werner Schnelle - o.T., 2013
Werner Schnelle
Unikate. Analoge Fotoarbeiten
Opens: Thursday, 18 January 2018, 7 pm
Exhibition run: 19 January – 3 March 2018
Salzburg fine art photographer Werner Schnelle has devoted his work to reflecting on the process of analogue photography. The focal point of his interest is not on the photographed motifs or on an epistemological understanding of the world gained through documentary photography. Rather, in his photographs, he explores the way in which the photographic moment of image capture and recording itself proceeds. This approach encompasses photographs taken with all sorts of cameras, such as Polaroid photography, and the use of extra large-format studio cameras; also, photographic techniques that dispense with cameras altogether, producing images on photo paper simply through exposure in the darkroom, i.e. photograms and chemigrams. He even experiments with photographic methods that only use photo paper and light, in other words without photographic chemicals to produce the image.
A common trait of all the works on show at the FOTOHOF exhibition is that they are unique images in the narrowest sense. In other words, no two images can ever be the same. Werner Schnelle’s fine art photography therefore resists the prevailing trend that entails the use of reproduction techniques with ever more sophisticated cameras and inkjet printers, a trend that now dominates today’s gallery sector.
A large part of the exhibition is given over to his Negativ-Unikate [unique negatives]. These images do not involve the use of any film (which, as a negative, would then allow further positive copies); instead, the photo paper itself is inserted directly into the large-format camera and exposed. This produces a large-format negative on paper, which is then exhibited in the gallery without additional processing or copying. As viewers, we are confronted with the immediacy of the inceptive trace of the image, allowing us to recognise the special aesthetic quality of the negative image. The photographed objects and landscapes appear before us in an entirely transformed stylistic idiom: new structures become apparent, and the inverted distribution of light literally highlights elements that would otherwise go unnoticed in a ‘normal view’. These Negativ-Unikate explore a fundamental process in analogue photography that disappeared with the advent of digital photography. Thus Werner Schnelle has added a further contribution to the analysis of the photographic perspective.