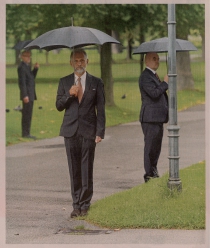 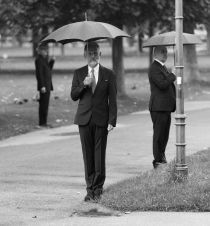 G.R.A.M. (Matthias Cremer) - o.T. , 2016.
Courtesy: Christine König Galerie Wien
opens: 10 August, 7.30 pm
Introduction: Christina Natlacen (Hochschule für Grafik und Buchkunst Leipzig)
Exhibition run: 11 August − 23 September 2017
FOTOHOF / Inge-Morath-Platz 1-3 / 5020 Salzburg / Austria
The events featured in G.R.A.M. re-enactments are not the ones people think they remember. Indeed, while the re-enactments often do reference actual people or historical figures, they are not particularly interested in them. For the G.R.A.M. artists, it is more about the multi-layered, image-critical strategy they devised some twenty years ago. The group of artists known as G.R.A.M. is interested first and foremost in 'visuality' in general and the way in which it is structured, its many different strategies and interpretations. And, in this context, different media and materials play a pivotal role.
In their exhibition at Salzburg’s Fotohof, G.R.A.M. re-enacts select images from everyday media, from topical political news of the recent past. So it's hard to dispel the impression of the paradoxical, of the (at times) absurdly surreal; in fact, that impression is even deliberately provoked. Entirely new content is created simply by strategically tweaking a panning shot, i.e. by substituting the protagonists, changing the locations, dressing up the references. Where one particular original might depict young Korean soldiers doing ballet exercises, the same scene as re-imagined by G.R.A.M. features their own involvement and that of their many peers. All of a sudden the context within which the protagonists evolve is completely different. Is it a self-help group playing out some group dynamics game as a way out of its misery?
It's the images that generate the content. For the Salzburg exhibition, G.R.A.M. has also incorporated ‘making-of’ photos of their re-enactments for the first time, broadening the levels of meaning and the levels at which images function. This is further amplified by the multiple change of materiality. A photograph in the paper is designed to bring events, people and things closer together; it works essentially in the interplay between image and text. But what if that same image now happens to be hanging on a wall, framed and mounted, in the compact format of a traditional black-and-white photograph, without any text. Or what if, as a wallpaper, it defines an entire space? The image is nomadic; it wanders from one medium to the next. Only the medium-based context sheds light on the relationships and the references within, and amongst, the images.
Security officers with umbrellas in the park (a Magritte motif perhaps?); a ground-breaking ceremony attended by high-ranking delegates; a political group photo: G.R.A.M. uses existing images to create what it refers to as a new 'visuality'. It is at the very least equally as real, equally as credible and true as the media images and images in general. Swept along as we are by the tide of images that engulfs us, we need a compass bearing to help us navigate our way. In its exhibition entitled Der Regenschirm, die Schaufeln und der koreanische Tanz [The umbrella, the spades, and the Korean dance], G.R.A.M provides and showcases just that.
G.R.A.M.,
(Günther Holler-Schuster, *1963, Martin Behr,* 1964), leben und arbeiten in Graz, Austria.
Press previews and meetings with the artists can be scheduled by appointment. Please call us on +43 662 849296 or email us at fotohof@fotohof.at to arrange a date.