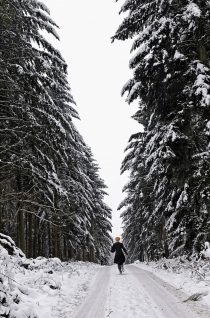 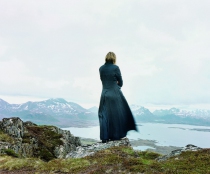 Elina Brotherus - Marcello's Theme, 2014.
aus der Serie: Carpe Fucking Diem (2011 - 2015)
Pigment Ink Print, 90 × 135 cm
Courtesy of the artist and gb agency, Paris
Exhibition run: 25 November 2016 − 21 January 2017
Closed: 24 December 2015 to 7 January 2017
Opens: Thu, 24 November 2016, 7.30 pm
Gilles Mora will be speaking at the opening
I am an artist, which allows one to do crazy things, contrary to „proper adults“. The older I get, the more I play. The things I am most interested in at the moment can be done with lightness and humor, even though my work also has a serious side. This is the very essence of a game : you determine crazy rules, then you follow them.
Elina Brotherus, 2016
The twenty-year retrospective curated by Gilles Mora for the Pavillon Populaire in Montpellier now also features the photographic and cinematic work of Finnish artist Elina Brotherus, to be shown in Austria for the first time.
The exhibition at FOTOHOF, which is scheduled to go on show at the Turku Art Museum, focuses on the role of the model in the artist’s work. In 1840 the mysterious self-portrait of the (co-)inventor of photography, Hippolyte Bayard, had caused widespread wonderment and consternation. The staged photograph of himself as a drowned man was designed to convey the pain and anguish he had felt at the lack of recognition for his groundbreaking achievements. It was also the first instance of a photographer seizing the opportunity to slip into the role of model.
That interplay is also a central theme in the work of Elina Brotherus (along with her interest in landscapes), and it expressed itself in psychological self-portrayals early on in her creative output.
As with Claude Cahun before her and perhaps also Cindy Sherman, here the self-staging is to be seen not just as part of a reflection on one’s own sense of self between catharsis and play, but also more generally as a reference to the visual arts.
Continually working on the image and an autonomous appearance within that image affords the artist the freedom to confide intimate moments to the viewer in a sort of soliloquy, albeit in encrypted form; as an ally, the viewer is then able to join the artist as she embarks on her wanderings and travels around the world.
The exhibition at FOTOHOF offers an overview of twenty years of artistic output, featuring some twenty-five tableau-like artworks, often in large format. From the early series entitled Das Mädchen sprach von Liebe [The Girl Spoke of Love] and Self-Portraits (1998) she spans an entire arc to Model Studies (2002-2008) and The New Painting (2003), from Artist and her Model (2005-2011) to Annonciation (2009-2013) and Carpe Fucking Diem (2011-2015). The exhibition of works is rounded off with the series Les femmes de la Maison Carré (2015) and a selection of her most recent film and video works.
Her interest in theatrical role play emerged early on, namely in the 1998 work entitled Divorce, in which she slipped into the wedding dress of her divorced mother, who died at a young age, and portrayed herself with a questioning facial expression, abandoned as it were in the urban landscape of a gloomy looking Helsinki.
In her series The New Painting she explores the romantic landscape painting of the 19th century, clearly referencing Caspar David Friedrich for instance through her own appearances in the image (The Wanderer 2, 2004).
In Annonciation and Fucking Carpe Diem she examines her (belated) desire to have children, depicting in almost self-tormenting images the failure of medical fertilisation treatment. But then Marcello, a dapper dachshund, soon makes his bright and sprightly appearance in the images alongside her and, as the new family member, becomes a companion (Marcello’s Theme, 2014).
The reference to art is a recurring theme in the artist’s work. In Les femmes de la Maison Carré, her work revolves around a famous building outside Paris designed in 1959 by Finnish architect Alvar Aalto. In meticulous staged self-portrayals of different female characters she invokes the (life) story of Louis Carré, one of the foremost art dealers of his day, who commissioned the architect and then resided at the property. With her subtle use of light in both interiors and exteriors she manages to breathe new life into an architectural gem that is now beginning to show its age.
Also on show at the exhibition are several film works by Brotherus. The artist has been working with video and analogue film since 2010. The starting point for her filmic work is the one-hour video entitled The Black Bay Sequence, which features the protagonist repeatedly stepping into a framed shot of a Nordic lake landscape. Clothed or naked she immerses herself in the atmospheric panorama of the lake, which across the wide horizon is separated from the opposite shore only by a thin black line, before returning to the starting point.
Her 16 mm film trilogy shot in New York between 2012 and 2015 comprises the performance-based experimental works Francesca Woodman’s Aunts (2012), Wrong Face (2013) and Howl (2015). In the Woodman film she commemorates the American photographer’s work, with which she feels a strong kinship. Wrong Face features performances by two ‘Alices’: here she appears alongside Finnish-American artist Viktoria Schultz, referencing Alice in Wonderland. The trilogy is completed with the downright grotesque interpretation of Allen Ginsberg’s literary poem Howl, a seminal work of the American Beat Generation. Finally, Tango Trousers (2015) interlaces eight short film clips on how her image worlds are created, with the music of Finnish composer Maria Kalaniemi.
Here the before and after of the photographs is illustrated in a continuous film sequence, addressing the relationship between the individual still image and the moving image.
Elina Brotherus, *1972 in Helsinki, studied at the University of Art and Design Helsinki. Lives and works in Helsinki, Finland and Avallon, France.
>> elinabrotherus.com