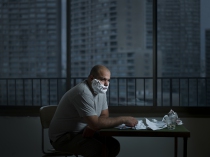 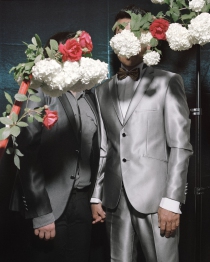 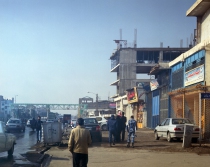 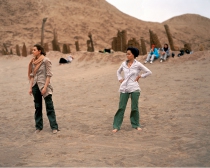 Exhibition run: 27 January – 4 March 2017
Opens: 26 January, 7.30 pm
Introduction: Amiri Motahar-Moti
Amiri Motahar-Moti (Curator)
Andrew Phelps und Kurt Kaindl (Co-curators)
The pictures at this exhibition offer insights into areas of life and social conditions in Iran to which outsiders are normally not privy. They range from the everyday changes to Tehran’s urban landscape to living conditions within Iranian middle-class families, which are private and therefore beyond the control of the state, to photographs of people who escape into a parallel world. The relationship between public and private is an underlying theme that occupies all the participating artists.
Navid Reza Haghighi focuses on parks and green spaces, which have a long tradition in Iran and are used extensively. For him these parts and their users are examples of the way in which public life is staged and played out. To the city’s inhabitants they provide a private, protected space while allowing a certain degree of public display and representation.
Hannah Darabi draws on everyday life in Tehran for her photographic narratives entitled HAUT BAS FRAGILE, adopting an undisguised, direct view of the urban landscape. This everyday view is often overlooked for the simple reason that it is quotidian, contrasting with the micro-narratives of the people who live here.
Bahram Shabani captures dense and particularly vivid street portraits in glaring light. These anonymous portraits depict the frame of mind of commuters as they pour into the city centre of Tehran from the suburbs, making manifest the contrast between the urban and the rural as well as the differences in people’s life plans.
Farzane Ghadyanloo returns unreservedly to the lap of her extended family as they gather every weekend at her parents’ house. She focuses on the chaotically affectionate family gathering, immersing herself into a private sphere which, in Iran, remains utterly untouched by politics and the public sphere.
Newsha Tavakolian showcases portraits staged with dramatic lighting against the backdrop of urban architecture, portraits that seem lost in time and space. They can be read as parables of modern lifestyles which, in Iran too, divide individuals as much as they unite them.
With her work entitled There Are No Homosexuals in IranLaurence Rasti references the restrictive legislation under which homosexuality is still punishable by death. She portrays homosexual couples in symbolically charged photographs which, at first glance, seem playful and original, until you realise that only the anonymity she has contrived to create guarantees the safety of these loving couples.
In his project entitled Holidays, Behnam Sadighi accompanies young people along lonely beaches where, in small groups, they can be entirely themselves, together yet also unobserved. But even in these locations the protagonists do not seem entirely at ease, and life itself is not under their control.
At the FOTOHOF’s invitation the artists will travel to Salzburg for the opening of the exhibition, where they look forward to engaging in many conversations. Only Newsha Tavakolian has a prior engagement.